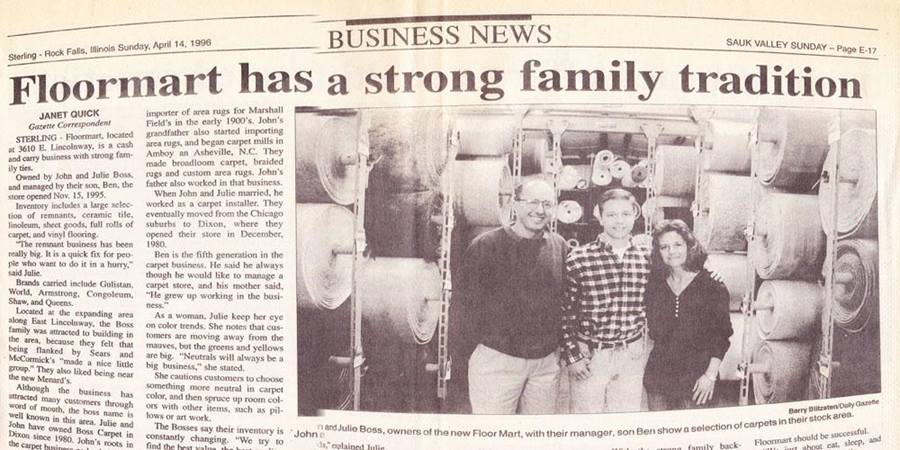 The Boss family has a rich and fascinating history in the flooring industry, spanning five generations and over 100 years. It all started with Herman J. Boss, who worked as the head of interior design at Marshall Field's & Co. in Chicago for over 50 years. His son John H. Boss followed in his footsteps, eventually purchasing a braided rug machine from the Deltox Company and starting a family business that fabricated braided rugs by hand and with sewing machines. In 1944, the Boss family opened a store in Westmont, IL, and later moved their mill to Hendersonville, NC in 1969.

Fast forward to 1981, when John and Julie Boss opened Boss Carpet in Dixon, IL. They quickly outgrew their original location and moved to a new store in 1985, built on Galena Avenue in Dixon. In 1995, after graduating from Northern Illinois University, their son Ben joined the business, and in 2000, Nick Boss opened a store in Freeport, IL. In 2003, they expanded further by opening a store in Cape Coral, FL. Today, the Illinois stores are owned by John and Julie's son Ben Boss, while their son Nick Boss, owns the store in Florida.

Throughout the years, the Boss family has remained dedicated to the flooring industry, bringing tradition and expertise to every aspect of their business. It's no wonder that carpet "is in their blood," as they have spent over 100 years perfecting the art of providing high-quality flooring options to their customers. We are grateful for their dedication and look forward to seeing what the future holds for the Boss family and their businesses.